With the release of the IEC 61850-9-3 “Power Utility Profile” in the middle of 2015, the precision time protocol (PTP) defined in IEEE 1588-2008 became officially an integral part of the 61850 world. But what does this mean for the planning of future substation environments? Will 9-3 replace the earlier introduced “Power Profile” defined in IEC C37.238-2011? Or will we face a battle of profiles?
These and several other questions in relation to IEC 68150-9-3 are addressed in this paper. Based on the current implementation situation and the findings from the IEC 61850 interoperability plugfest 2015, the paper explores the differences and commonalities of the two PTP profiles for power applications and their interoperability. 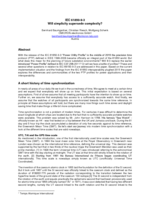